I was fortunate enough to be born in peace time, albeit just a few weeks after VE Day in 1945. So as I grew up as a child it was during a time when we celebrated our victory in World War 2. The cinemas were showing lots of film celebrating our exploits during that traumatic time, but as a young lad I gave no thought to what impact it had on families. To be sure, each Remembrance Day we attended the Memorial Service at the Bramhall War Memorial to honour, amongst others, my uncle, .

Later as a married man with a family for years, as we sped along the A26 motorway from Calais to Rheims on our holidays, we could catch just the briefest glimpse of the Canadian War Memorial at Vimy Ridge. Then one year we had a long weekend in early December in , not far from Vimy Ridge. So on a cold, dank & misty Sunday morning my wife & I decided to visit it. It turned out to be one of the most moving experiences of my life.

We climbed steadily out of up to the Ridge, passing through pine forests with signs warning of unexploded munitions and the zigzag trenches still visible. Eventually we parked in a deserted car park and followed signs for the memorial. We arrived at the path leading to the memorial to be greeted with the only sign of its type I have ever seen. It said: "No dogs allowed - including guide dogs". There was a plinth recording the gift of the plot of land by the Government of France to the people of in perpetuity as thanks for their supreme sacrifice in World War 1.

As we walked towards the memorial it gradually loomed out at us from the mist. It was enormous. The memorial itself was mounted on a double plinth. As we approached I commented that the stonework of the plinth looked distinctly moth-eaten compared to the smooth stone of the sculpture above. Only when we drew near did I see, to my horror, that the reason why the plinth looked that way was because it was simply covered with names - not hundreds of names, not thousands of names, but tens of thousands of names.

The weather cleared and I could look down from the heights of Vimy Ridge. As I did so I could only think with despair at the desperate loss of life as it took 6 Canadian divisions to scale the heights and eventually win the Ridge. Only then did it really sink in that for each name of those tens of thousands of brave soldiers it meant a family ruined forever, with grieving mothers, wives, sweethearts and children. I determined then that I would do what I could to honour, in particular, those members of our family who made the ultimate and supreme sacrifice of laying down their lives so that we today can enjoy the freedoms and liberty that we from time to time take so much for granted.

I made sure that my children knew of what had happened. Not so long ago I took them to the Menin Gate, at Ypres in . This World War 1 memorial lists around 56,000 names of soldiers who have no known grave. Just think of it - 56,000 brave lads, a lot of whom had no choice over whether they served or not. Although World War 1 finished over 86 years ago, nevertheless at 8.00 p.m. each evening, come rain or shine, the Gate is closed to traffic (it straddles one of the main roads out of Ypres). Volunteers from the town's fire service parade and play Last Post on their bugles. It is a very simple, yet very moving ceremony. When we were there I was pleased to see that lots of parties of schoolchildren were present to witness a ceremony that has taken place every day since the memorial was opened. The only time when Last Post was not sounded was when the town was occupied during World War 2. Even then, it was sounded on the evening of the very day that the town was liberated.

This section is dedicated, with grateful thanks, to the memory of the members of the family who fell in service of their country. The Commonwealth War Graves Commission lists 38 Marples whose graves are in their care. Of these, I can positively identify 14 as being members of our Marples family. I have subsequently identified 70 further family members who come from female lines. It is particularly poignant and sad to have to record the deaths of two brothers and their first cousin, all members of the Sames family, and who all died in World War I, 2 brothers from the Settle family who served in the Army & Royal Flying Corps during World War I, 2 brothers from the Sharp family who both served in the Royal Air Force during World War II, 2 brothers from the Dolden family who died in World War I being the only sons of their parents, and 2 brothers from the Unwin family who died within a year of each other in World War I. Then there is Private Francis James Eyre who died on the very last day of World War I. There are almost certainly more members of my family to record, but have yet to be discovered, and I apologize for their omission at this time. I hope in due course to be able to visit all their graves and memorials to honour them individually.

In the meantime, here are the ones I have identified. Include them in your prayers! 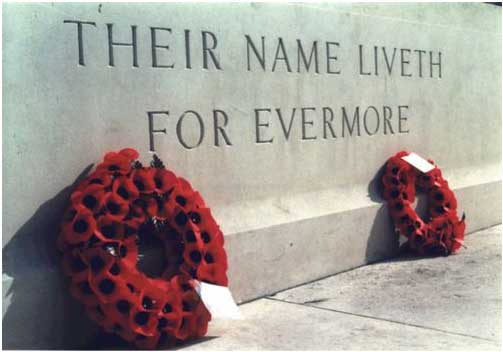 "WHEN YOU GO HOME, TELL THEM OF US AND SAY:

FOR YOUR TOMORROW WE GAVE OUR TODAY"

BACK TO HOME PAGE