In July 2006 Jean & I made a tiring and emotionally draining pilgrimage to 14 cemeteries in the care of the Commonwealth War Graves Commission (CWGC). At each one a member of my family was either buried or commemorated and Jean posted a little Cross of Remembrance (you can see the photos of each one on the Debt of Honour Register. I should add that I have not yet identified a member of Jean’s family that died for Kind & Country, although many of them served in both World Wars.)

Over the years we’ve seen many photographs and films of these war grave cemeteries on television. But seeing them on television is one thing, seeing them for real is quite another. Although no two are the same, each one is instantly recognisable from the style of architecture and layout. Each one is maintained to the highest possible standard no matter how big or how small, or how inaccessible. In several cases the CWGC cemetery is an extension of the local communal cemetery (e.g. Ostende, , & Abbeville). Quiet often there are war graves of French or other Allied soldiers nearby and the comparison in the maintenance is quite stark. The CWGC cemeteries are absolutely pristine, whist the French, in comparison, can only be described as scruffy.

Very sadly, one CWGC site has been the subject of repeated attacks of vandalism with the result that its opening hours are now restricted. And where is this site? , you might think? No. or , perhaps? No. To our shame the site in question is the impressive Naval Memorial at . It is my fervent hope that the souls of the brave sailors and marines commemorated there are occupied elsewhere and not aware of the desecration of the memorial that commemorates the supreme sacrifice they made so that some mindless idiots could have the freedom to besmirch the memorial. Shame on them.

We started our pilgrimage at the Chatham Naval Memorial and then crossed the Channel and headed off a few hundred miles to in , just a few miles from in . The following morning we stopped off at the , which, as the name implies, is in a forest. It’s a big cemetery, and I will not deny that tears sprang to my eyes to see all the headstones. Particularly poignant was to the see the gravestones of several World War II bomber crews, all buried together. From there to Ostende in and then the short distance to , where there are hundreds of war cemeteries.

One such was the biggest CWGC site, Tyne Cot cemetery. Tyne Cot is an unusual cemetery in that the plinth on which stands the Cross of Remembrance is much larger than normal, as you can see from the photo below, left. It’s only when you come close to it does the reason become apparent – the plinth entirely covers a German blockhouse, a small portion of which is visible through an opening in the masonry. It made the hair on the back of my neck stand up on end when I saw it. 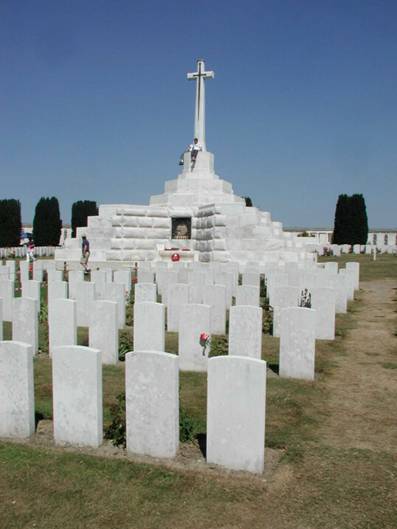 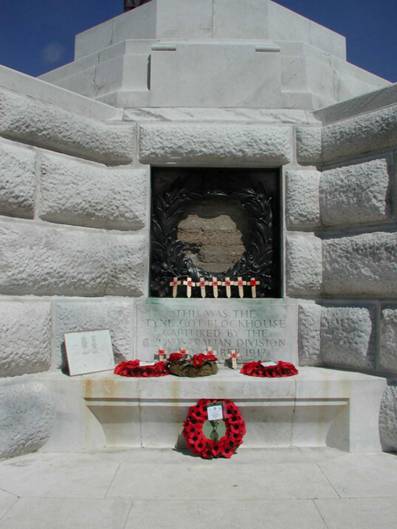 The other unusual aspect about Tyne Cot is that some of the gravestones in the immediate vicinity of the blockhouse are not arranged the usual razor sharp serried ranks, but are higgedly-piggedly. This is because these stones mark the exact spot where these brave lads fell in taking the blockhouse.

When we arrived there were already 2 coach loads of schoolchildren visiting the cemetery, and yet another arrived just as we were leaving. In the cemetery there were children everywhere, including some, I was disconcerted to see, climbing all over the plinth of the Cross of Remembrance. On reflection I decided that perhaps that was as it should be. The children were learning of the immense cost, in human terms, that preserving freedom entails. I feel that the souls of the fallen men would somehow be quietly satisfied that their sacrifice had not been in vain, and that these children were enjoying the freedom to scramble over the plinth for which these brave lads had given their all.

In all we visited 14 cemeteries and memorials. In many ways one of the most moving was the right in the middle of nowhere a kilometre or so outside the small of in . To get to it one has to proceed down a farm track until one reaches a narrow grass path leading to the cemetery which has a field of corn to the left, and a field of potatoes to the right. Notwithstanding that this must be one of the smallest CWGC cemeteries it was maintained to the same highest standard as all the others. Not a weed to be seen, either in the lawns, impeccably trimmed, or in the little flower beds which immediately surround the gravestones. There is a photo of the cemetery below. You can just about make out the low stone wall beneath the two trees which are planted in the cemetery. 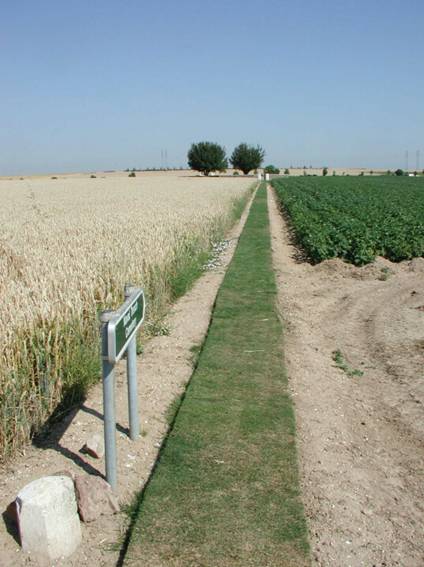 The interested reader can find photographs of practically all the CWGC cemeteries and memorials at their website (click on the link at the bottom of this page. Here are two more that I want to show you. The first is the Australian Memorial to the 10,000+ Australian soldiers who died thousands of miles from their homes, situated just outside the village of Villers-Bretonneux on the Somme; the other the Cemetery at Loos, in the Pas de Calais region of France. 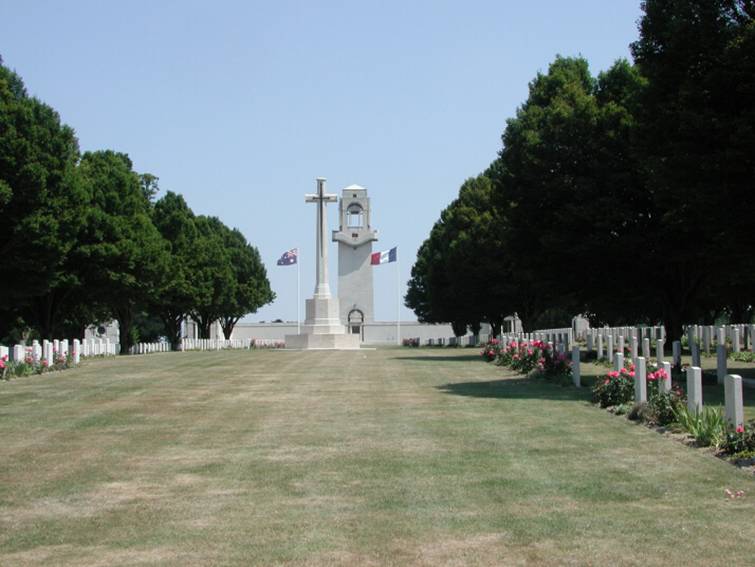 The Australian Memorial at Villers-Bretonneux, 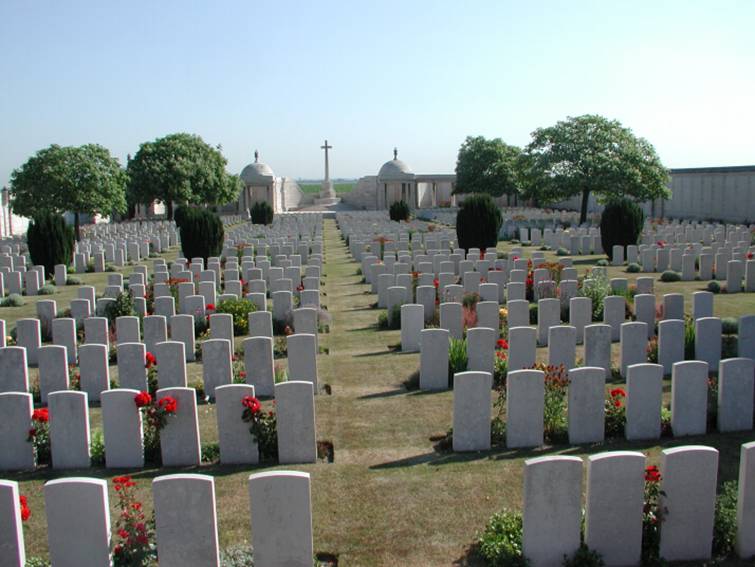 The looking out over the countryside in the

One aspect of this pilgrimage that will forever remain with us were the host of personal tributes to loved ones in all the cemeteries we visited. In many ways the saddest aspect of looking at these gravestones is to see so many bearing the simple inscription “A Soldier of the Great War – Known unto God”. What was particularly moving was, particularly at Tyne Cot, was that some kind persons had planted small Crosses of Remembrance by so many of these gravestones. It was if they wanted to say “I don’t know who you are, chum, but don’t think for a second that your sacrifice has gone unnoticed or unappreciated.” At the end of our pilgrimage we had one or two little Crosses of Remembrance left over so Jean planted them by some of these gravestones.

Arriving back in we took the opportunity to visit the Battle of Britain Memorial, a few miles out of off the A20. Click on the link below to see the Memorial. And so we arrived back home absolutely exhausted. It had been hard work driving over 1,200 miles round Europe in 4 days in the middle of a heatwave, to say nothing of the difficulties of trying to find the cemeteries (finding the gravestones themselves was fairly straightforward). We were also emotionally drained – to see thousands and thousands of gravestones, and thousands and thousands names inscribed on memorial panels because they have no known grave. Each name representing a family torn apart - a mother’s son, wife’s husband, or lover never to return home. Children who were now fatherless. Each gravestone and memorial standing in quiet and peaceful dignity in the sunshine tended with infinite diligence by people who really care. The sad and simple tributes left by family and friends. It was enough to make us weep – and we did. A salutary reminder that the freedoms and liberties we all enjoy today, and sometimes take for granted, have an enormously expensive price tag.

RETURN TO DEBT OF HONOUR REGISTER