In addition to the three Marples joiner’s tool making companies there have been other businesses bearing the Marples name (whose founders appear somewhere in my family tree) :

This company was founded by, not surprisingly, John Marples. John was born in on 5th July 1830, the son of Samuel Marples and Mary May. Samuel was a brother to the Robert & Joseph Marples who founded joiner’s tool making companies.  He himself was a publican, which probably explains John’s interest in wines & spirits. John married 3 times and passed to the business on to one of his sons, Edward John Eyre Marples. The business was eventually taken over by the well know brewer, John Smith, but I don’t know when this happened. At one stage the company was brewing beer at Tadcaster in , but whether this was under the aegis of John Smith or not I don’t know.

In in the 1880s John Marples owned a building called Market Street Wine Vaults (previously the Wine & Spirit Commercial Hotel). The licence was later held in the name of his son Edward. The building was a substantial 7 storey structure. The locals always referred to the pub as “The Marples”. On 12th December 1940 it was completely demolished by a German bomb, with a death toll of around 70. It was ’s worst bombing of the war.  In 1959 the site was eventually redeveloped by John Smith and the pub reopened and was now officially called “The Marples”. It lasted until 2002 when it suddenly closed and motorcycle accessory shop now trades from the premises

Thomas Marples was the younger brother of John Marples (supra), and was born in in about 1833. How he started in cutlery isn’t known, but he did so right at the start of the career. He appears in the 1851 census, aged 19, when he was described as a fruit knife cutler.  He produced lovely fruit knifes made out of solid silver with mother of pearl handles, sometimes ornately carved. They can frequently found on eBay, the online auction website. Thomas died childless in 1912 and so the business came to an end trading under his name.

This company was started by Edward Osborn Marples in partnership with one Beasley. Edward was born in in 1871, the son of William Kent Marples, who had inherited the joiner’s tool makers, William Marples & Sons. This company is still trading today, although without and family involvement. According to one family member, Edward was cheated out of his partnership by his partner, for some unknown reason. Marples & Beasley products abound on eBay: they make (or made) all manner of Masonic jewels and regalia, the totally politically incorrect “Golly” badges used as a marketing tool by Robertson’s jams, & cap badges for any number of Army regiments to name but a few.

As an aside, I have to tell you that one of the delights of family history research is that one never knows what one is going to discover! The correspondent who told me of the alleged fraud against Edward Marples also told me that Edward was one of four brothers, which statement I have been able to verify. My correspondent went on to tell me that one of Edward’s brothers (name withheld) ran off with the wife of yet another brother (nothing new there, then – Ed.). To seek solace the cuckolded brother joined the merchant navy and sailed the seven seas. Some years later he arrives in after a very long voyage. As is the custom of many single sailors (and I dare say some married ones as well) the first business of the day, after shore leave had been granted, was a visit to a house of ill repute. Imagine his surprise on entering the bordello to find that the Madame was none other than his estranged wife! It’s a fascinating tale, even if it turns out to be apocryphal!

This company was started after World War II by Alfred Ernest Marples, born in in 1907. He was a very dynamic man, and initially became a Chartered Accountant. According to his 1st cousin, my father, at some early stage in his career he had done some time as an on course bookmaker’s clerk – a demanding job requiring quick thinking and a good head for figures. He served in the Royal Artillery during World War II, working his way up the ranks to Regimental Sergeant Major. He was later commissioned and retired with the rank of Captain. According to my father Ernest started up the business with a desk, a telephone, an ex-Army wagon and £5. The business prospered and eventually became a major player in the construction of major civil engineering projects, including the building of motorways.

Ernest entered politics as a Conservative Member of Parliament for Wallasey in . He served in various ministerial posts including Postmaster General, ending up as Minister of Transport. (During this time he was responsible for the introduction of ERNIE, (standing for Electronic Random Number Indicator Equipment, which generated the winning numbers of Premium Bonds), STD (subscriber trunk dialling) which did away with the necessity of having an operator route your telephone calls, parking meters and traffic wardens (which inspired the “Marples Must Go!” slogan of the day), and the Beeching Plan, which axed large, but unprofitable, sections of the railway network.)

When Ernest was appointed Minister of Transport he had to relinquish his shareholding in Marples Ridgeway Limited in order to avoid a conflict of interest. The company is still in existence today, but there is no family connection with it.

Marples Gears, Inc. was established in 1942 in by Edward Stuart Marples to supply the aircraft and instrument industry with a source for precision gear manufacturing and gear cutting.

They specialize in high-precision fine-pitch gears for customers that require precise movement and positioning. Marples Gears manufactures fine-pitch gears and have during the past 60 years, served many industries including; Aerospace, Defence, Optical, Space, Medical and Commercial.

Edward later sold the business to Phillips Aviation Co., but the company continues to trade today. Interestingly, Marples Gears manufactured some of the gears used in NASA's Mars Rover.

This company was started by William Marples, baptized in Bradfield, in 1820,  at some time between 1861 (in which census he was a saw grinder) and 1871 (in which census he was a soda water manufacturer employing 2 men). A saw grinder is not a well paid occupation, and quite where he got the money with which to start the company is something of a mystery. It certainly was not from his father, Joseph Marples, who died in 1826 or his mother Sarah Brushfield, who died in 1843. Perhaps it came from his second wife Elizabeth Nuttall or her family. In the 1881 census he is described as a soda water manufacturer. William died on 27th June 1884 and in his will is described as a ginger beer manufacturer. He left the business to his only child, also called William, together with the leasehold premises in , where the business was based.

Son William carried on the business until his death on 14th November 1889. In his will he is described as an mineral water manufacturer to his widow Elizabeth and his children. But after this date I have not found any further trace of this company.

Below is a photograph of one of their small bottles (roughly equivalent to the modern “split” size bottle as used by pubs for mixers.) 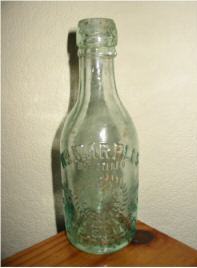 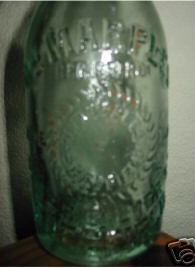 It is believed to have been started by Charles Herbert Marples around the turn of the century in . Charles, whilst not (yet!) a relative of mine, nevertheless comes from one of the Baslow Marples families that I have not been able to bridge across the gap in the parish registers caused by the Civil War. I have a small decorated 19th century pewter coffee pot made by this company.

I cannot finish this section without making special mention of John Marples, 1794-1874, who although he didn’t start a trading company, nevertheless left his mark on those times. He was born in Baslow, the son of John Marples & Elizabeth Brittlebank and was a first cousin of the Robert & Joseph Marples who started their joiner’s tool making companies. Unlike the toolmakers, John remained in Baslow and became a millwright. John’s claim to fame arises because he worked on the Chatsworth estate of the Duke of Devonshire. The Duke’s estate manager was Joseph Paxton who is credited with the design of the built to house the Great Exhibition of 1851 in .