This isn't the place to describe in detail the history and functions of heraldry. A trip to a good reference library will reveal a vast literature on the subject, to which the interested reader is directed. Having said that, the history of heraldry in goes back centuries. It is regulated by the , and to this day, it remains a criminal offence to use someone else's coat of arms to which you are not entitled. Only the original bearer and his lineal descendants have the legal right to use a coat of arms.

In the entire history of all the Marples families there have only been 3 coats of arms granted to them (although there is a coat of arms which has had a wide circulation, but has no legal standing, which I discuss at the end of this article). The first, and also the most desirable, was confirmed to Richard Marple of Edensor (the next parish going south from Baslow, containing Chatsworth, the ancestral seat of the Dukes of Devonshire) in 1574.

The term "confirmed" comes from the time when the Heralds of the went round the country regulating the use of arms in days when abuse had become a serious matter. The right to bear arms was acquired in two ways. The first method was by outright grant and in modern times remains the only legitimate way of acquiring them. The second way was by confirmation where a claimant could successfully show that a particular coat had been borne for three generations, even though they were illegal. This is the case of Richard Marple of Edensor. Unfortunately the confirmation, which is in the Bodleian Library in , does not show Richard's ancestors other than to describe him as "the elder". Nor can any trace be found of a descendant of Richard Marple of Edensor although several people have tried.

The coat of arms of Richard Marple of Edensor

The second coat of arms was granted in the nineteenth century to George Jobson Marples, an eminent QC of his day. George was born in 1845 in Sheffield and is descended from a medium sized Marples stemming from Barlborough & Staveley in (not that far from Baslow). He was one of the earliest investigators of Marples ancestry. His pedigree, as published in several editions of Burke's Landed Gentry, traces the Barlborough family back several generations. Some early researchers used this pedigree and then make the entirely unsubstantiated connection to Richard Marple of Edensor. However, he was unable to convince the that he was entitled to the 1574 arms, and was granted his own arms. The Heralds certainly agreed that there was a possibility of some kind of connection, as the design of the arms he was granted has a great deal in common with the 1574 arms.

The arms of George Jobson Marples are still being borne today. George died a bachelor aged 84 in 1929 but in his will left a considerable sum of money (£49,000 in fact, a sizeable sum in those days) to his fiancée, Dorothy Ethel Green, in his will. It was a condition of his will that to inherit the money she and any subsequent beneficiaries must first change their name to Marples. This was done in 1931 when Dorothy Green changed her name to Marples and again in 1962 when her nephew, Alexander Newton Gardner, of changed his name to Marples and was granted the right to use George's arms by Letters Patent in 1964. 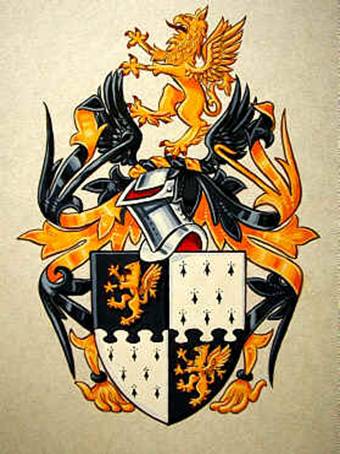 The coat of arms of George Jobson Marples of Great Longstone

The third coat of arms was granted to me in 1984. Like others before me, I cannot prove descent from Richard Marple either. Originally I thought that my branch of the family might be the closest, but as my research continues I have little hope of establishing a connection, as I now believe the Edensor family moved away to Bonsall near Matlock. My design is heraldically very similar to the 1574 coat. Note that both George Jobson Marples' and my coat of arms contain features to be found on the 1574 coat of Richard Marple. 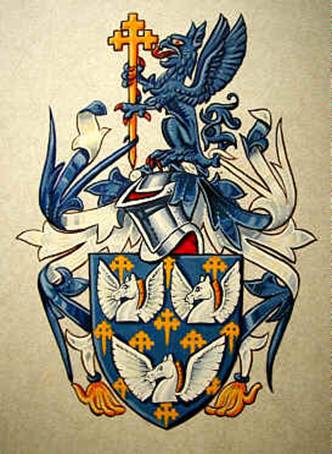 The coat of arms of Rodney Brian Marples of Silchester

The world of heraldry is full of marvellous archaic words and expressions and I thought it would be fun to set out the blazons of Richard Marple's arms and my own.

Richard's is : "Sable semy of Cross Crosslets fitchy a Gryphon segreant Or and for the Crest upon a Helm on a wreath Or and sable a Pegasus' Head couped with two wings argent maned Or Mantled Gules doubled Argent".

My blazon is : "Azure crusilly fitchy or 3 Pegasus' Heads couped each winged argent and maned gold and for the Crest upon a Helm with a wreath argent and azure A Gryphon sejant erect Azure supporting a Cross Crosslet fitchy in pale or Mantled Azure doubled argent"

Crosslet - the north, east and west arms of a cross are themselves a small cross

Segreant - posture of the gryphon and difficult to describe in words.

Wreath - band of material between the helmet and the crest, with the two principal tinctures (colours) alternating

Couped - cut at the neck with a horizontal line

Blazons always start with a colour and this is the background colour of the shield.

There is one coat of arms which seems to have a wide circulation in the family of David Marple (born 1796 in Baslow, died 1881 in ). Here is a picture of it: 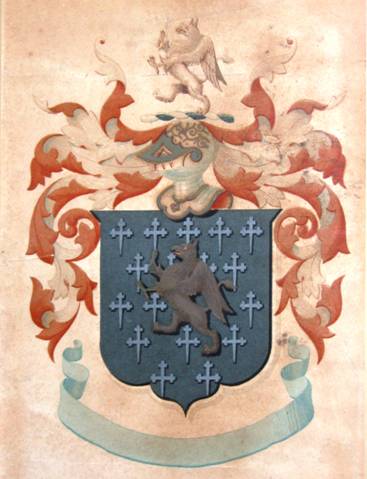 This is an example of a coat of arms which has no legal standing. What that means is that anyone can use it for whatever purpose they like, unlike the 3 legitimate coats arms shown at the beginning of this article.

The blazon comes from Burke’s General Armory where it is described as being that of Richard Marple of Edenstour & Bonsall. (Edenstour is Edensor, but I have found no connection between Richard and Bonsall, but see the article on Marples Origins for a further discussion on Bonsall). The General Armory is known to be inaccurate and this is a good example. Comparison between this coat and that of Richard Marple shows that the shield design and the mantling are correct, but the crest is quite wrong. The colours of the shield are peculiar, and in their present condition are wrong. However as the original from which this photo comes is quite old it’s possible that the colours have changed over time from what they were originally.

BACK TO HOME PAGE