I am deeply indebted to David Dalrymple-Smith of Baslow for all his help and assistance in providing me with maps and data for this page, as well as a lot of other useful information. David, although not a native of Baslow, has lived there for over 40 years, for many of which he was a G.P. Following his retirement he has devoted a lot of his time to researching the , its people, land and buildings. Being a resident of Baslow has meant that David has been able to take some lovely photographs in and around Baslow in absolutely optimum conditions and the photo below is a spectacular photo of the church. 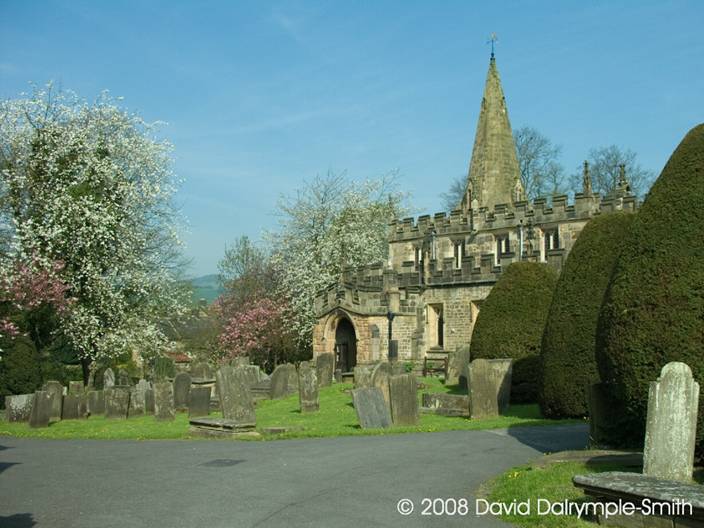 The subject of this study is the Baslow Tithe Award for 1848. This was created following the Tithe Commutation Act of 1836 which replaced the payment of tithes with a rent-charge apportioned between the landowners in a ‘tithe district’, which was usually a parish but could also be one or more townships. Originally, tithes were a tenth of all produce of the land which people had to surrender in order to produce a living for the incumbent of their parish church. There were two types of tithe: great or rectorial tithes of corn, hay, wool and lamb; and small or vicarial tithes of cows, calves, foals, poultry, bees or anything else which an incumbent could reasonably claim as titheable.

Under the Tithe Commutation Act, owners of land and tithes in a parish could voluntarily agree a sum to be paid in lieu of tithes for the whole parish. Once this agreement was confirmed by the bishop of the diocese, the patron of the living and the Tithe Commissioners, the landowners would appoint a valuer to apportion the agreed rentcharge on each plot of land. This required the drawing up of detailed maps which showed each individual plot of land, including buildings where appropriate. These maps were accompanied by a detailed schedule which showed for each plot of land who owned it, who occupied it, what the rentcharge was and what tithe commutation was. David has produced a detailed analysis of the Baslow tithe award and this has enabled me to identify all the land and buildings occupied by members of the Marples family in 1848. I have also taken the opportunity to identify where other members of my family, through female lines, were living. The results are set out below. The numbers in the discs identify the head of each household. Number 1 is my 3x great grandfather William Marples, and the relationship of the other Marples family members are to William, and not to me . The significance of the different colours used is:

Blue discs: other members of my family 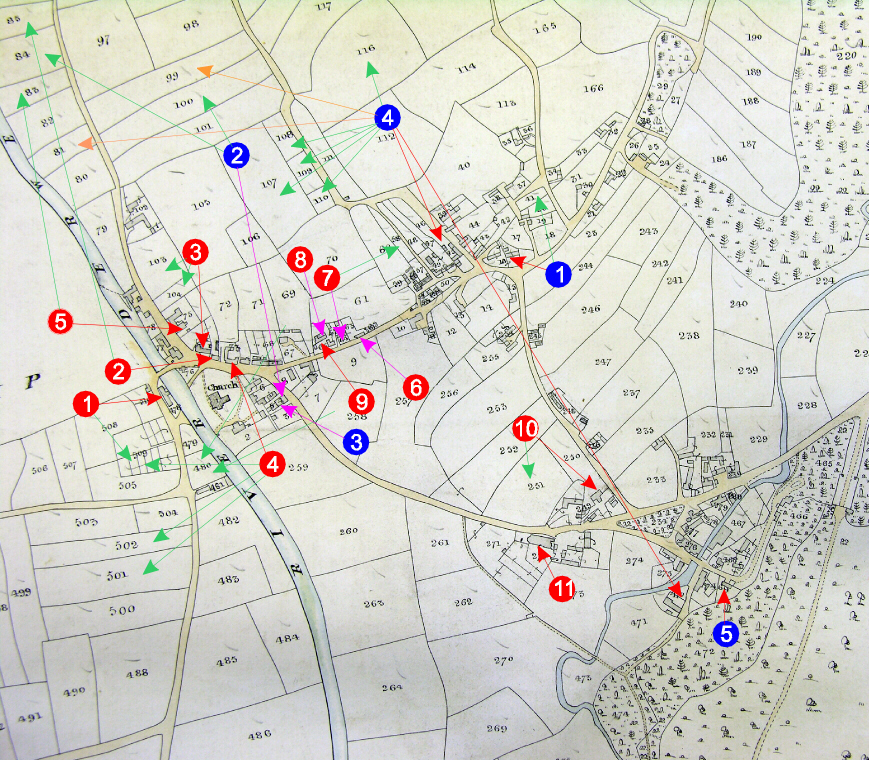 Other family members through my female lines:

From the point of view of the villagers the tithes were just another form of taxation and doubtless viewed by them with the same enthusiasm that you and I view our tax bills today. I was therefore amused, but not surprised, to come across a document in the Derbyshire County Record Office in Matlock which said:

“Summoned for the non-payment of small tythes, offerings, oblations and obventions becoming due on 16th April last being Easter Day, 1786:” There then follows a list of names including:

Robert Marple of Gate [a district of Baslow, yet to be accurately located]

The document did not state what fate awaited the miscreants!

RETURN TO THE HOME PAGE